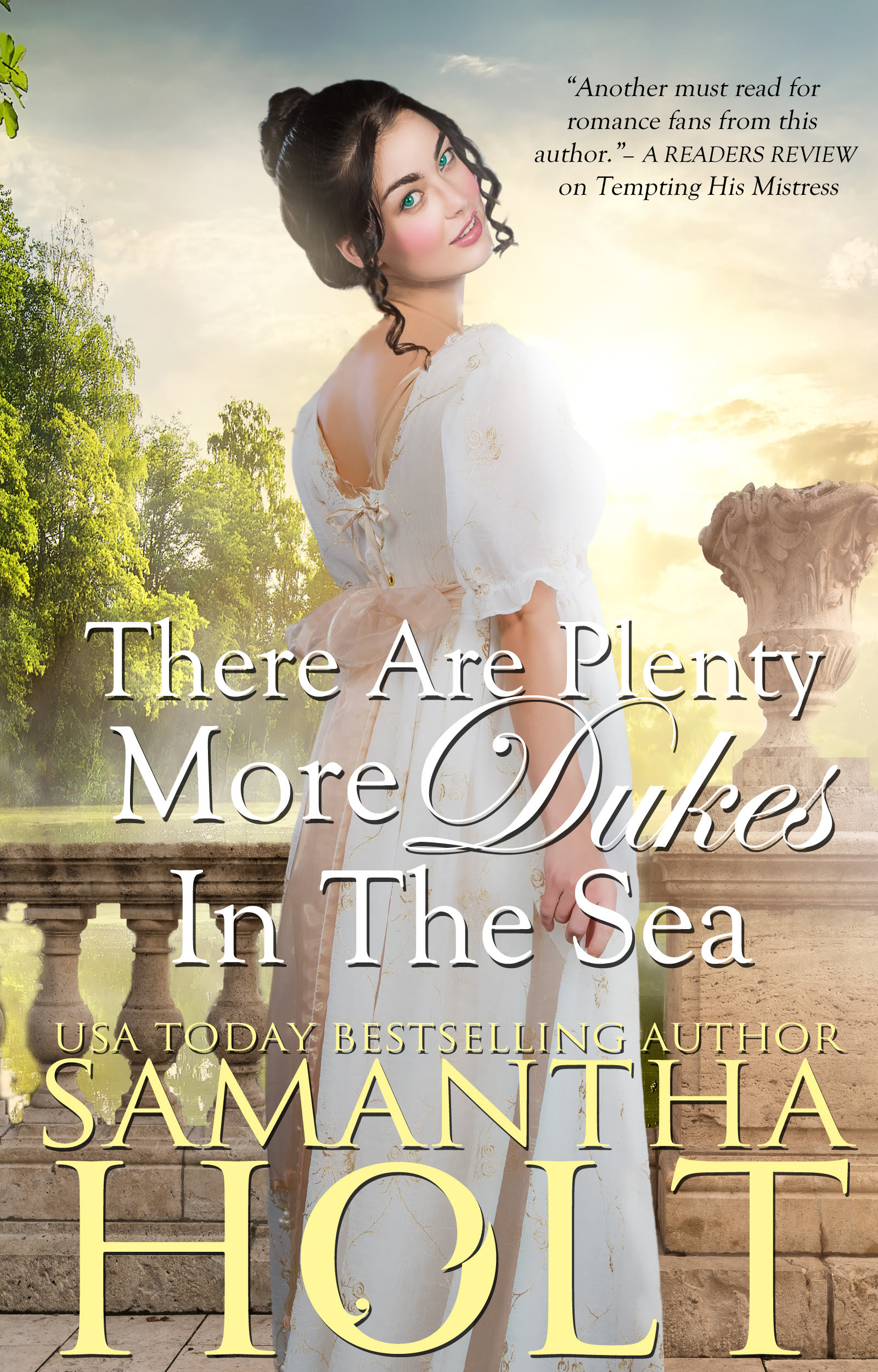 Title: There Are Plenty More Dukes in the Sea (The Inheritance Clause Book 1)

The Templeton siblings have inherited a fortune. But there’s a catch…

I, George Lockett, do decree that my grandchildren, herein named, will inherit my fortune in its entirety, so long as they fulfill the following terms. Each person must complete their task to my lawyer’s satisfaction or their share of the inheritance shall be forfeit.

There are many reasons Lady Angel Templeton needs her grandfather’s money. Of course she wants to be less of a burden to her oldest brother but, goodness, once she has even more money, she can have her pick of the men! A certain Duke of Norwick would be a fool to ignore her…

Unfortunately, their beloved grandfather decided not to make it easy on the Templetons, though Angel is convinced her task must be the hardest. To fulfill the terms of the will, she must perform unpaid duties as a lady’s companion for two months to the entirely unmanageable Mrs. Stone.

What’s worse, Mrs. Stone is determined to be an even bigger handful than Angel herself.

No…what’s worse, is the lady comes along with a miserable wretch of a nephew. While she cannot deny he is handsome in that dark, brooding way so many women adore, Angel does not enjoy the company of serious men–especially when they have already declared they do not trust her one jot.

Well, she doesn’t trust him either. It soon becomes obvious why the stern Mr. Hunter is determined to haunt her every move–he must want Mrs. Stone’s money!

Well, Angel cannot allow anything happen to her new friend, especially when she risks losing everything.
There Are Plenty More Dukes in the Sea is a Regency romance novella with a little heat. Keep an eye out for the rest of the Templeton siblings, coming very soon!
AMAZON | GOODREADS 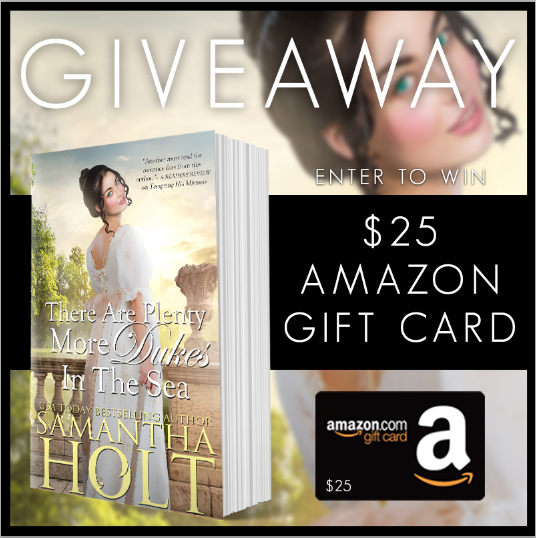 “Well, now that we are all here, shall we begin?” he asked, looking to Theo.
Theo gave a stiff nod. “If you please.”
The lawyer tweaked his cravat and pushed spindly glasses back up his nose. “As you are aware, your grandfather had no sons and there are no male relatives to inherit.”
Angel looked away from the lawyer’s sweaty features. Their grandfather had been a baron of excellent means thanks to some fine investments. Why that meant all of them needed to gather, she did not know. With no male heirs, it was assumed most of the wealth would pass to their mother—his only daughter—and maybe Theo as the oldest grandchild. Goodness knows, Angel would far rather be joining Miss Newhurst at Hyde Park and enjoying the fine weather while trying to spot the Duke of Norwick, who was known to drive his curricle through the park on warm days like today. Though she was not certain she wanted him seeing her in such grim clothes. He would never fall at her feet in this unattractive sack of a dress.
Fixing her attention back onto Mr. Barton, she pressed herself to listen. Did the man have to have such a droning voice? It was horribly difficult to concentrate on his words when he spoke in that monotonous tone.
“My daughter will inherit a sum of one thousand a year for the rest of her natural life and my beloved family home—Holbury Hall.” Mr. Barton glanced up, presumably to look for her mother’s reaction, but she remained a mask of dignity even though Angel knew her mother would be glad that the home where they had all enjoyed such wonderful childhood memories was hers.
Mr. Barton licked his lips and drew out a handkerchief to dab his forehead. “And finally, I, George Lockett, decree that my grandchildren, herein named, will inherit the rest of my fortune in its entirety, so long as they fulfill the following terms.”
Angel drew her attention from the pretty gilding that ran along the edge of the room and shared a look with Seth who made a face and gave a shrug. None of them had anticipated inheriting anything from Grandpapa, but the Templetons could certainly do with the funds. After their brother had been swindled by his late-wife, they all had vowed to take as little as possible from him, but it was not easy to live on little as Angel had discovered.
“Each person must complete their task to my lawyer’s satisfaction or their share of the inheritance shall be forfeit,” Mr. Barton continued.
The man glanced around the room. Angel’s siblings remained still, brows creased. Minerva pursed her lips and opened her mouth before shutting it again. Theo tugged his jacket straight. Seth leaned in then shifted back in his chair.
Angel huffed. It would always be up to her to speak up for them all, which was ridiculous. She was the youngest for goodness sakes, but they were all too held up by the idea of propriety—even Seth who prided himself on being quite the rake.
She held up a finger. “Mr. Barton, if I may, what on earth do you mean by ‘task’? And to whom will the money be forfeit?”
The lawyer shifted in his sheet and scanned the paper in front of him. “I was just…um…about to get to that.”
“Well…?” Angel pressed.
“Angel,” her Mama hissed.
Chastened, Angel folded her arms across her chest and tapped a finger against an arm.
“Let’s see.” Mr. Barton’s brow puckered. “Ah.”
“What is it?” Theo asked, a hint of irritation edging his voice.
Angel noted he did not get scolded by their mother.
“If you are unable to fulfill your tasks to my satisfaction, all remaining inheritance shall be bestowed upon a Mr. Hastings.”
A sharp inhale of breath echoed around the room. Angel met Minerva’s worried gaze.
“That’s preposterous,” Theo blurted.
“Theo,” Mama scolded.
Angel had no time to be smug that her brother had finally been reproached. How could she celebrate such a tiny achievement when the bulk of their wonderful Grandpapa’s wealth could go to such a beast of a man?

Angel jolted away from the door, a hand pressed to her chest. “I was just—” Words failed her when her gaze traversed Mr. Hunter. She could not help but take a slow, lazy perusal of his person, taking in the damp hair, the open collar of his shirt, the unbuttoned sleeves that were rolled up to just below his elbows. Veins and sinew flexed on arms that were slightly sun-kissed. A jacket was slung carelessly over one shoulder.
Mouth dry, her mind raced. If a glimpse of a lack of cravat had addled her mind then she might as well be committed to the asylum now. Nothing could have prepared her for Mr. Reuben Hunter slightly damp and not at all appropriately dressed.
To make matters worse, his lips tilted slightly, drawing her attention to a mouth that should be banned on men. It was entirely unfair that the rougher sex should be bestowed with full lips like that.
“Forgive me, I did not think you would be awake.”
She jerked her gaze up to his and tried not to imagine how hot and pink her cheeks had to look.
“No…” The word came out more like a mouse squeak than a word. She cleared her throat as quietly as she could. “No…no need to apologize. I was just, um, checking on your aunt. She had a rather restless night.” Angel put a hand to her hair and grimaced internally. How must she appear in yesterday’s crumpled gown and her hair wild? And here he was looking as though he had been conjured from one of those gothic romance novels.
A crease appeared between his dark brows, and his gaze trailed over her. “Did you spend the night with my aunt?”
Hands tight at her side lest she start fussing with her hair again, she gave a stiff nod. Surprise lit briefly in Mr. Hunter’s eyes. Angel could not help but lift her chin. The man apparently thought her utterly heartless, despite hardly knowing her.
“She needed me, Mr. Hunter, so I thought it prudent to stay with her until she was settled.” She forced a smile. “That is what I am here for after all, is it not?”
“Indeed,” he said tightly. Mr. Hunter swung his jacket from over his shoulder and clasped it in both hands. “If you will excuse me, I should…” He motioned to his bedroom door.
“Do you ride every morning, Mr. Hunter?” she blurted out and fought the urge to slap a hand to her forehead. What was wrong with her? The question had been burning in her mind, but she had not anticipated it escaping her, not when she was so close to ending this interaction and escaping his relentless glower.
“I do.”
“Even in the rain?”
He motioned down his person. “As you can see.”
“Yes.” Oh yes, she could see. She saw the way his shirt clung to muscles that implied he did more than riding. Fencing perhaps. Or maybe boxing. Muscles that were apparently making her ask the most nonsensical questions. Maybe he was correct in not trusting her to look after his aunt. After all, she was hardly proving herself to be the cleverest of women. 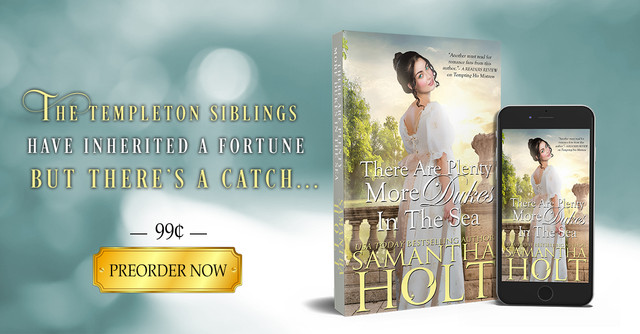 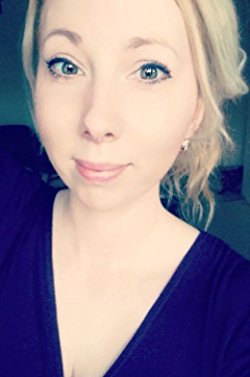 USA Today bestselling author Samantha Holt lives in a small village in England with her twin girls and a dachshund called Duke. If you’re not sure where to start why not try…

Amelia and the Viscount (Bluestocking Brides #1) for a fun, slightly hot shorter length read. Meet the Chadwick sisters and follow their adventures in each of their standalone stories.

You’re the Rogue That I Want (Rogues of Redmere #1) is a longer read with heat, witty dialogue, a feisty heroine and adventure. All books in the series are standalone.

Sinful Confessions is the first in the Cynfell Brothers Series. These are all novella length and standalone–ideal for a quick dip into the world of the sexy Cynfell brothers.

Wake Me With a Kiss is a sweet, fairytale romance. Twists on Beauty and the Beast and Cinderella are also available if you love a clean, fun read.

To Steal a Highlander’s Heart is a full length dive into the world of sexy highlanders. For those who love braw Scots, some steamy scenes, and medieval romance, this series is a perfect escape.