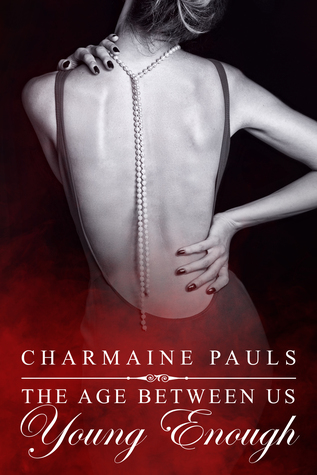 Title: Young Enough (The Age Between Us #2)

I thought I’d lost everything. My life was in tatters when a man half my age broke into my property and invaded my future. Our love is forbidden, but I’m single and he’s all the taboo I crave. For once in my life, why not? But what if I start wanting more than a fleeting love affair? What if his secrets will destroy me? I had no idea how much more I was about to lose.

(Young Enough is Book 2 of The Age Between Us duology. Old Enough, Book 1, must be read to follow the story.)

*ARC generously provided by the author’s publicist via Bookfunnel in exchange for an honest review.*

Blogger’s Note: If you haven’t read Old Enough yet, then I suggest you not read this review because it might spoil things for you.

Our love drowned. It wasn’t strong enough to withstand the onslaught of my lies. My deceit.

I’ve said it before, people have heard it before, and I will say it again until the entire world hears it too. Age is just a number. It’s already hard enough to find true love but we also have to stay within the line society has created on who we should spend the rest of our lives with? If it feels right, go for it. Only you can decide what makes you happy.

It’s a crucial part of love. It’s knowing when to let go.

The plot is amazing, family matters, work matters, daughters, siblings, mothers, everyone matters but the most important factor is love. From the very beginning it was never going to be an easy ride for our ship. The world is against them, but they do have each other. The break-up was what I was looking forward to in this book because it was bound to happen and to my surprise it wasn’t how I expected it would be. The reason was not what I thought it would be and that scene was hard to read. It was painful and just heartbreaking.

When it starts with a lie, you’re going to wonder when it became real and which parts of it was true.

It’ll be better if I sneak off in her dreams. It’s less harsh than having to face the wrenching pain of a goodbye spoken in a doorway, of watching someone walk away, until you’re the one left behind, standing on your own with nothing but silence and loneliness.

Brian is every bit a man as men twice his age. He did have to grow up early to take care of his family but that’s also one of the reasons why Jane is so attracted to him. When in a misunderstanding, he faces it head on like a man should and finds a way to talk and explain his side of the story. He doesn’t run away, he doesn’t let Jane assume the worst of him.

How do I soothe someone when I’m broken myself? How do I make it right when all I have left is so much despair?

An independent woman and a loving mother. Very different from the girls Brian goes to school with. Sure, she may be a little old school and hard headed sometimes but she’s like any other woman especially when she’s in love. Crashing a party just to see him one last time and making rash decisions in the heat of their lust for each other.

There was a time I believed it was a love beautiful and pure, but now I know it’s a love tainted with obsession and tarnished with lies. But sometimes an impure love is the greatest thing we’ll ever accomplish. It’s not perfection that matters, but how deep our feelings go. It’s existing at the center of someone’s world, even if just for a few fleeting minutes against the rough bark of a tree.

Charmaine Pauls has done it again. Every person that matters in the lives of our two lovers have been given the chance to speak up their mind and showed us where they stand in this uncanny relationship between Brian and Jane. It’s such a beautiful world Pauls has created. Sometimes we need to set aside our differences, forget what society thinks and understand how a person feels. I couldn’t have asked for a better ending to their story.

I let the closure of goodbye settle in my heart, enforcing it with my guilt.

Charmaine Pauls is utterly amazing with romance between two people from different worlds and with different views of the world. She seems to enjoy duologies and I am only too eager to read them. Comparing this story to her Lone Shark Duet, I can confidently say that her message is clear. Age is just a number, love can be found in the most unlikely of places from unlikely people, and love will always find its way back.

I have yet to meet a couple with this kind of relationship where the woman is older than the man, and I very much would love to know their love story.

“I don’t hate you.” If anything I love him even more, and it hurts. GET THE BOX SET!