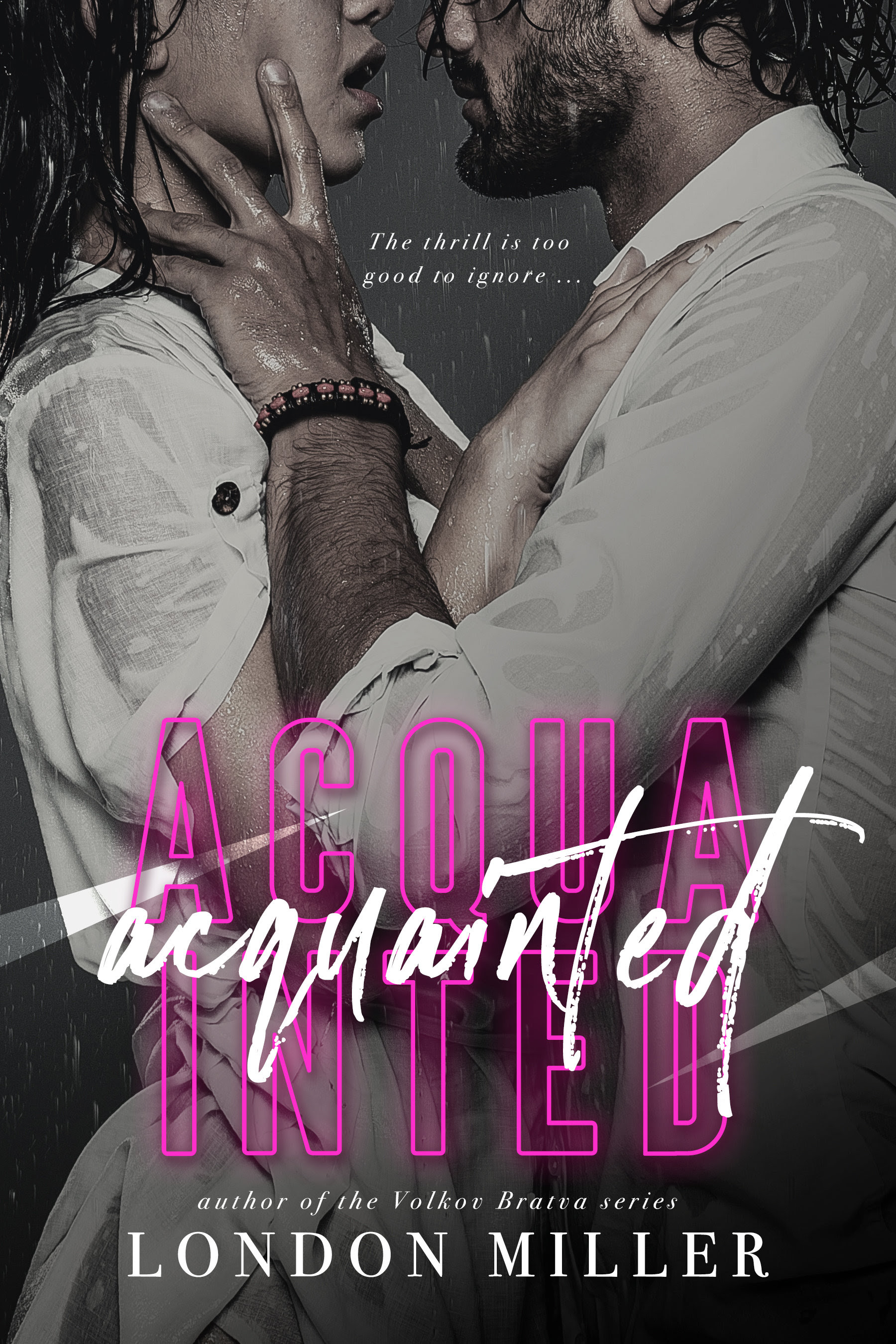 They met under summer showers …

Vera Markovic only wanted a vacation away from New York where everyone knows her as a Russian Mafiya printsessa of the Markovic Bratva. She didn’t expect to find something worth remembering. And definitely not a man like Alfie Shelby.

They fell in love when the leaves changed colors …

As New York City’s notorious fixer, Alfie Shelby always gets what he wants—and when he sets his eyes on Vera, he’ll do anything to keep her … even if she’s not sure she wants to be kept.

She wants nothing to do with a gangster.
A life of crime is all he knows.
But neither can deny what they have, even when forces beyond their control try to keep them apart. Trying to do anything to her hair that wasn’t throwing it up into a messy, but stylish bun was out of the question. The humidity already had strands sticking to the back of her neck, and had she actually bothered with curling it, Vera was sure they would have fallen by now.

Not that it mattered much. She was supposed to be here on vacation—a time for her to relax and enjoy herself without care of anything else.

Which was why, despite the allure of a new project calling her name, she had left her villa and walked over to the bar where more than a dozen people already littered the floor and drinks were being passed all around.

After a minute of careful shuffling and quiet apologies, she made it to the bar, waiting until the bartender looked in her direction before she lifted her hand to signal she was ready to order.

A woman wearing a sheer dress that showed more than it covered stumbled off her stool, her date quickly moving after her. Glancing in their direction to make sure they weren’t returning, Vera claimed one of the empty seats.

Nearly to the second she sat, a figure moved from her peripheral and sat across from her, his smile wide and his eyes a little feverish.

Already drunk, if she had to guess.

The worst kind of men in a bar.

“You’ve got a great pair of legs on you,” he said with obvious approval as he blatantly looked down at her legs and lingered there.

Even if she had ignored the fact that she could smell the liquor on him, he wasn’t helping his case by being utterly clueless.

“Ne trat’te svoye vremya—Don’t even waste your time,” she told him in Russian, hoping he would get the hint and just move away, but it was clear her not speaking English didn’t mean a thing to him.

If anything, his smile grew a little wider.

“You,” he said a little louder, stressing the word, as if if he spoke louder, she would understand him better. “have nice—” then he pointed at her legs.

Vera rolled her eyes and turned in her seat, electing to ignore him. Hoping that if she pretended he didn’t exist for long enough, then he would just go away.

The bartender finally reached her, a customary smile curling his lips. “What can I get you?” he asked.

“Sex on the beach,” she answered, not bothering to even look at her unwelcome guest as his brow furrowed at her speaking English.

It was another few minutes of him stumbling over his words and blatantly eyeing her before she finally had her drink in hand and she could at least have this going for her if she would have to suffer through him not having a clue.

Her gaze moved around the bar, over the dancing couples of the floor, people seated at tables and enjoying food, but in her casual observance, that’s when she noticed him.

Even in the sea of people all around, it was impossible not to notice him. He stood out amongst the vacationers wearing khaki shorts and bikinis, already three sheets to the wind. Instead, he was in a pair of dark wash jeans, tailored to his muscular thighs, and a plain white T-shirt that did nothing to hide the muscles beneath it.

His attire might have been casual, but there was nothing about the man that seemed remotely casual at all.

And he was watching her.

She had thought, as she lifted her drink, tucking the straw between her lips, that he would look away once he noticed her attention on him. That he would be embarrassed to be caught staring as most men were, but he didn’t blink, or avert his gaze. A corner of his mouth tugged up into a slight, but arrogant smile.

He wanted her to know she had his attention.

Vera found herself smiling despite herself.

There were usually two type of men that wanted her attention. Businessmen who wanted her to heed to them—for her to be a pet of some sort. Smile when she was spoken to and be glorified arm candy.

Then there were the thrill seekers who thought that because her last name was Markovic that they would earn themselves some sort of prestige.

She doubted very much this man was the second considering he couldn’t possibly know who she was or even where she was from—and she was sure he wasn’t a part of her father’s organization because he was just a little too scruffy—but if he was the first … he would learn all too quickly that she wasn’t any man’s pet.

The man he was seated with, with sandy blond hair that was styled in that way that seemed to be in at the moment, was still speaking to him, but realized all too quickly that he no longer had the man’s attention. A fact that was solidified when he stood and threw back his drink before he left the private area where they were sitting to walk over to her.

She had every opportunity to get up and leave if she wanted to. But as he crossed the floor, people moving out of his way without him having to utter a single word, she remained where she sat, curiosity thrumming through her.

Vera couldn’t remember the last time she felt a thrill quite like this—and before he had even spoken a word to her. But there was just something about him that commanded attention.

The way he seemed to own the room. How broad his shoulders were. The unruly beard that she was now wondering how it would feel.

Lust, she thought a moment later. This was what lust at first sight felt like.

She counted down the seconds as his long-legged stride ate up the distance between them until he was suddenly there, right beside her, and she could smell the woodsy aroma of the cologne he wore that only added to his appeal.

“Is he bothering you, luv?” he asked, with a cant of his head in the direction of the man who hadn’t known how to take no for an answer.

That accent—rough around the edges, lilting around the L’s. That would have been enough for her to entertain him for more than a few minutes, but that, as well as the rest of him … he had her full attention.

“Why don’t you fuck on off, yeah?” her stranger—her stranger?—said, hardly looking away from her. As though she were the only one worthy of his attention.

“Who the hell do you—” the man started, but hesitated when he got to his feet and realized just who he was up against.

He might have been tall, was even lean a bit, but he had nothing on her stranger. The man had a solid fifty pounds on him, if not more, and there was a hardness to him that said he really didn’t want to pick a fight with him.

Whatever he thought to say, he swallowed it back down and quickly made his exit without looking at either of them.

A smile fought its way onto her face. “I could have taken care of him, you know.”

“Oh, that wasn’t for you, luv,” he said as he took the man’s vacated seat. “That was entirely for me. I wanted your attention and now I have it.”

He’d had her attention long before now, but she didn’t bother telling him that. “And you are?”

He extended his hand in her direction, wrapping his much bigger one around hers, then closing tight. She didn’t think her hand had ever felt more smaller than it did now. “Alfie Shelby.”

How ridiculous that she even liked his name. “Vera Markovic.”

His expression didn’t change when she said her name, merely kept that same casual interest that had been there since he was across the room. That managed to make her relax further. He didn’t know who she was, or where she had come from.

She liked it that way.

“It’s a pleasure, Vera,” he said as he lifted her hand and briefly kissed the back of her knuckles.

It was such a contradiction—the hard man on the exterior compared to the gentleman like qualities he possessed. She couldn’t say she didn’t like it.

“Are you here alone?” he asked a second later.

“Smart girls know not to answer that,” she answered with another sip of her drink, gently extracting her hand. Curious or not, gorgeous or not, she wasn’t a fool. And she knew all too well the kinds of men that were in the world.

If he was offended, Alfie didn’t show it. Instead, his smile grew a touch. “Fair enough.”

His gaze left her for a moment as he signaled for the bartender who, despite already serving one customer, came right over. It made her wonder just who he was.
As he ordered—a rum and coke for himself, another of whatever she was drinking—Vera looked him over. It was second nature to look for tattoos that symbolized a life of crime. She could read any of them as well as any man in her father’s organization.

It had become common practice for her when she realized her father had men trail her on occasion.

But beyond a British flag that was tattooed over his heart, she didn’t see anything that would tie him back to her father, or any family that she knew of.

Another point in his favor.

As the bartender scurried away to fulfill their drink order, Alfie looked at her again. “D’you want to go out with me?”

Her brows shot up in surprise. “You don’t waste any time, do you?”

“Not when I know what I want,” he returned easily.

But she couldn’t say she minded.

“Okay,” she answered before she could talk herself out of it.

He nodded once and moved back to his feet just as the bartender was setting their drinks on the bar between them.

She expected him to walk away, not that he had her affirmation, but he stepped closer to her, making her look up at him, but Alfie merely leaned in close enough to press his lips against her jaw then said, “Sweet dreams, Vera,” before he was grabbing his drink and walking back to his booth.

Vera wasn’t often intrigued by men enough to agree to a date within five minutes of learning their name, but Alfie … she was almost sure he would be impossible to say no to.

With a degree in Creative Writing, London Miller has turned pen to paper, creating riveting fictional worlds where the bad guys are sometimes the good guys. Her debut novel, In the Beginning, is the first in the Volkov Bratva Series.

She currently resides in Atlanta, Georgia with her husband and two puppies, where she drinks far too much Sprite, and spends her nights writing.

One thought on “Excerpt #2 & Giveaway: Acquainted”