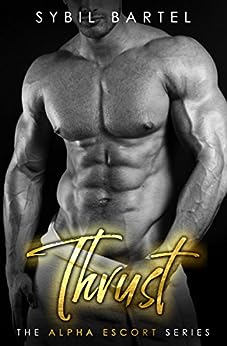 My hands on your body, my mouth hovering over yours—I’ll tell you everything you want to hear. Ten inches of real estate never felt so good.

But don’t take my word for it. My client list is long and my motto is short—one single thrust and you’re mine. I’m not good at what I do, I’m fantastic. But satisfaction doesn’t come cheap. So open your wallet and prepare to forget your name. I’m about to ruin you for any other man.

One single thrust and you’re mine.

This book was not what I expected and I love it for that!

Fate had walked into my fundraiser in an expensive suit and that was that.

An expensive male prostitute who gets turned on by the number of zeros his clients are willing to pay him finally gets roped in by a girl who presses his buttons. Basic plot, playboy/fvckboy straightens out because of a girl. NOPE. That’s not the entire story and she’s not the only reason.

We all had our demons but Alex didn’t make me feel like I needed to have all my broken pieces pushed together. He made me feel like they didn’t matter.

Two broken people coping with life in their own ways. We judge people so easily because of the choices they make without even asking them the whys and hows? Olivia blames herself for the death of her brother, Alex loves money because he came from none.

Life had stolen my heart, but fate was giving me this moment to take it back.

I don’t want to spoil you about the book, I’m just telling you that if you like romance and erotica with a little bit of twist then this one’s for you. Oh and if you like ex-Military men too 😉 That’s the only spoiler I could give you.

I was adrift. And the man standing next to me wasn’t the anchor.
Alex Vega was the storm.

That ending when Olivia finally put things together about her best friend, Alex, and her life was the same moment I also understood each character. I went through this book blind to the deeper feelings of the characters. By the end of this book I have opened my eyes to the world about really not judging people. It’s bad and it’s wrong and as much as I want to, I really shouldn’t. I’ll probably end up naive but I’ll still remain cautious.

This will not be my last Sybil Bartel book! I can guarantee you that.