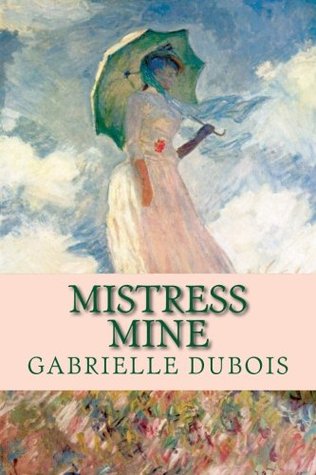 In 1876, Louise St Quentin is sixteen. She is an orphan and the rich owner of a huge estate. Her future seems all mapped out; a marriage of convenience which would help her manage her estate. But Louise listens to her heart rather than her reason.

The end of the 19th century is terribly exciting, and Louise wants to discover everything – the adventure lying at the end of the railway track, romantic music, the modern cuisine in the new Parisian restaurants, and impressionist painting. Will her artistic, cultural and sensual upbringing going to lead the young girl to her ruin or to love? Will Louise, the young French girl find the grass greener on the other side of the world?

Gabrielle Dubois, the author, obviously studied the fashion of the 19th century in detail – the very sophisticated, elaborate clothes, especially in the upper-class circles which Louise moves around in, and in fact the whole novel is extremely well documented.

The reader can’t help getting attached to the heroine and the men and women who cross her path during her travels. Louise Saint Quentin might become one of them much desired “Mistress Mine” but she is above all her own “Mistress Mine” as she has to learn all about life and how to fend for herself from a very early age, something unusual for a girl at the time.

The numerous, often pithy, dialogues throughout the novel show her personality and how it evolves. They bring both Louise and the other characters to life and together with all the little, well-observed details, create “a reality effect”. In a word, we are drawn into Mistress Mine from the start and we find hard to put it down. Although we are rather sad to get to the end, we know there is another volume of the saga “Where are you roaming?” which will be available in June 2018 and we can’t wait to read it.

Louise is such an inspiring character. Mistress Mine is a beautifully written coming of age story set in the second half of the 1800s. A must read for literary fans.

If Louise Saint Quentin were a real person who lived in the past, then this would be her memoir. She is both bold and brave. She’s not afraid to venture into the unknown all by herself.

The leaves dancing in the trees were shining in the light of the moon. The air was more fragrant than any perfume from any of her bottles.

It’s an easy read but it’s not a quick read. It took me quite a while to finish this book because physically wise, it is a huge book. Though it does have thick pages it has a lot of words too. The present story takes place in four years time and within those four years Louise has grown into a lovely young woman and has traveled across Europe. With her upbringing you’d think you’ll feel pity for her, but what I felt was anything but. I felt excited and elated as she is.

“A child’s love for its parents doesn’t go without saying. Love has to be deserved, and it takes time!”

My favorite part about this book is whenever a new character is introduced, a chapter will be dedicated solely for that character. Who his parents were, to the event on how he came to be this person at present and how he’s related to the other characters. I am not only learning about the life of Louise but also the life of other notable characters. There’s so many characters in this book that I had to write them down with their corresponding roles and relationships.

Why the book is called Mistress Mine? (My opinion, not the author’s actual reason) That is because Louise has met many gentlemen all in various ages throughout her adventure. Those men are also captivated by not only her beauty, but also her wits. Everyone around her is drawn to her energy and a lot of the said men would like to have Louise by their side.

I really took my time in reading this book. In my opinion, it’s not something you should devour in one sitting. You have to take breaks and let the new information sink in, let excitement grow inside. Another reason – which every other reader has – is I don’t want it to end because I enjoy Louise’s company so much. Her life is so unsure, I’m always looking forward to who we’ll meet next and where her adventure will take me next.

“I’ll take you as you are, Louise. I’m not interested in any of those young girls who pounced on me when I arrived here. I don’t want an innocent young dimwit programmed to marry a man or rather his fortune. Louise, you’re a free woman. You don’t need to marry to ensure your future. If you marry me, it’ll be because you love me, me and me alone.”

I’m looking forward to reading the second book in the story because Louise’s story hasn’t ended yet. The ending of this book was so exciting, filled with love, but I’m also left with lots of questions. With Louise, always expect the unexpected.

3 thoughts on “Book Review: Mistress Mine”