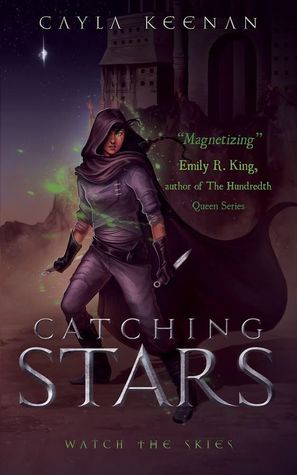 Jayin Ijaad is in hiding. A witch with powerful abilities, she carves out a life for herself in the slums of Pavaal, a city rotting from the inside out. When an old acquaintance tracks her down, Jayin is dragged back into a world she tried to escape — and is determined to escape again.

Maddix Kell is on the run. After two years in prison for crimes he did not commit, Maddix escapes and seeks out a legendary order of witchhunters who are his only chance to find justice.

But all is not as it seems and Maddix soon finds himself on the run from the people he sought as allies. When their paths collide, Jayin and Maddix must put aside their prejudices and forge an uneasy alliance that could crumble at any moment. But if they want to survive in Aestos — a brutal kingdom where magic and corruption lie hand in hand and enemies lurk around every corner — they must first survive each other.

*ARC generously provided by the publisher in exchange for an honest review.*

A thrilling adventure and action packed it every turn, it’s spellbinding. Cayla Keenan is an author to look out for, she brings a whole different breed of witches with super cool powers!

The stars had been her hope. Proof that there was always something to light the way, even when the night was blackest.

It’s a whole new world! I don’t know if it’s entirely made-up or based on a certain belief or religion but it is truly entertaining. The world building didn’t take too long, however, the terms and foreign italicized words need some time to get used to. Sometimes for a single living kind there are two terms and my brain was doing its best to keep that information.

The events do happen as quickly as possible, there are a number of settings where the characters go through in their adventure and magic is not over used in this book. Though I feel like I should warn you, there are a lot of deaths here, so don’t get too attached to some characters. BE WARY.

A pair of monsters, on their way back to the city that created them. There’s so many characters that you need to keep your mind sharp to keep up. Sometimes I take a moment to recall who this character their naming is. He’s only ignorant in magic, as a Guard he’s sworn to hate the witches but that hate came without truly understanding them and the limit to their powers. He now thinks that his star no longer looks out for him, but great things come in the oddest of ways.

“She might survive this, but she will not survive you.” She’s a new bad-ass female I’m adding to my growing list. She did what she could to protect herself even if it means creating a fake, dangerous and deadly creature to inspire fear in the people who wish to harm her. She’s not even afraid of death, but she does care about her responsibility to others and making sure they have a future to look forward to. It’s written in third person point of view, however the chapters shift between the two main characters. The story follows one party without using first person point of view but there are subtle changes in the writing when it shifts. And I love that about this book.

I also love how Jayin and Maddix’s relationship wasn’t forced, they hate each other and soon they come to an agreement that they no longer hate the other because of all they’ve been through. “Only foolish boys think only those with eyes can see.”

I truly believe this would make a great TV series, it’s got a lot of action and magic. What else is better than that?

This was really a great read. I wasn’t even going to request it but then Emily R. King (one of my new favorite authors since last year) quoted the front of the cover and I knew I had to take her word for it.

The ending was okay, I wasn’t so surprised about it though I didn’t expect anything either. There’s so much more to see, so many characters to visit again. I still hope that one character will magically return, I hated his death. It hurt me. Can’t wait for the next installment, I’ll be missing these characters and this world for a while but I’m sure it’ll be worth the wait. Watch the skies, Catch the stars