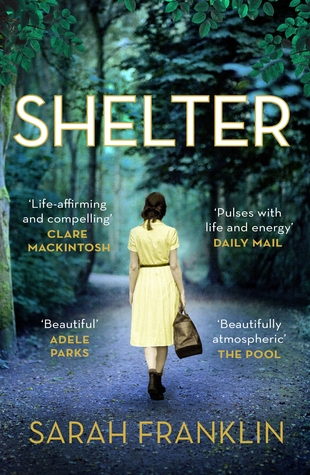 ‘Set far from the rumble of bombs and blare of sirens, the deeply profound effects of war quietly resonate through Sarah Franklin’s delightful debut. Filled with characters armed with little more than steadfast resolve and plucky humour, Shelter casts a light on the forgotten work of the Women’s Timber Corps, presenting it with charm and refreshing warmth.’ Jason Hewitt

Spring 1944. Connie Granger arrives, alone, in the Forest of Dean. Fleeing her blitzed home and the war that’s fiercely raging on, she will train with the Women’s Timber Corps as a lumberjill. Deep in the heart of the forest, Connie’s duties will include felling, snedding, loading and crosscutting.

As she is drawn to the healing rhythms of the ancient forest and its remote local community – the forester and his wife, the shepherd, – Connie battles with the knowledge that she must soon make a life-changing decision.

Also arriving in the forest is Seppe, an Italian Prisoner of War, who is haunted by the past. Amongst the trees of the forest, he finds a strange kind of freedom and when Connie and Seppe cross paths in the forest, their meeting signals new beginnings. With the support of one another they will find the means to imagine their own lives anew and to face the fears that haunt them.

In this explosive moment of history, everything is changing. Women just like Connie – brave, uncompromising and strong – are finding opportunity and liberty like never before. But is the price Connie must pay for her freedom too great?

Sarah Franklin grew up in rural Gloucestershire. She lectures in publishing at Oxford Brookes, is the founder and host of Short Stories Aloud and a judge for the Costa Short Story Award. She has written for The Guardian, Psychologies, The Pool, Sunday Express. In 2014, Sarah was awarded a Jerwood/Arvon Mentorship on the strength of her opening pages of SHELTER, and worked on the novel for a year with Jenn Ashworth, amongst others.

Sarah’s connection to the Forest of Dean
I’d known about the POW camps in the Forest of Dean all my life – my grandmother used to take in sewing for the prisoners, and gave me tokens which they used in place of ‘real’ money. The idea of a sensitive prisoner also brought me to Connie, who is the antithesis of Seppe, and the real driver for the book.

To research the book I spent a lot of time in the archives of the Imperial War Museum, reading and listening to archived accounts from Lumberjills. The Dean Heritage Museum in the Forest of Dean provided similar invaluable material. I also read two first-hand accounts of life in the actual POW camp in the Forest of Dean, which were incredible and really informed the camp scenes.

About the Women’s Timber Corps
The work of the WTC included all the jobs involved with forestry including felling, snedding, loading, crosscutting, driving tractors, trucks, working with horses and operating sawmills. A more specialist skill was measuring which was the job of assessing the amount of timber in a tree, measuring the amount of timber felled, surveying new woodlands and identifying trees for felling.

Initial training consisted of a four to six week course at one of the Corps depots before being posted to a billet elsewhere. The work was heavy and arduous but there was a grudging acceptance from farmers and foresters that the women of the WTC were as good as the men they had replaced. Pay ranged from 35 to 46 shillings per week. Towards the end of the war some of the women were considered skilled enough to be posted to Germany to help salvage the sawmills there.

About the Forest of Dean
The Forest of Dean has played an important part in the heritage of Britain especially from the 17th century when the oak timber and iron became important for the expanding shipbuilding industry. Later following a visit to the Forest by Lord Nelson in 1802, 30 million acorns were planted across 11,000 acres. Despite further demands during the first and second world wars, the Forest, has maintained much of its traditional appearance. In addition, much of the war-time felling was replanted with oak and other broad leaved mixtures.

Until 1955 coal mining was one of the area’s main industries with five collieries (the last closed in 1965), and is still undertaken at a few small mines operated by Freeminers. The centuries old mining rights (applied to iron ore, coal and other minerals and even quarrying for stone) entitle any male born within “the hundred of St Briavels”, aged 21 or more and who has worked for a year and a day in a mine to legally register as a Freeminer with the chance of being granted a ‘gale’ of coal (or ore).