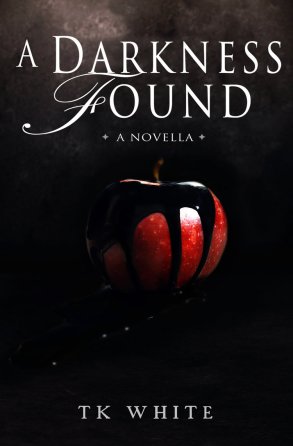 Title: A Darkness Found: A Novella

In the realm of Neleque, magic is not expressly forbidden, but it’s considered taboo. Grimhilde couldn’t care one way or another about her magical abilities, she just wants to marry Bastian and live happily ever after. Her mother, on the other hand, wants Grimhilde’s powers to flourish so her daughter won’t be weak.

When a terrible tragedy occurs, Grimhilde shuts down and gets shipped off to Mageia, an academy for the magically gifted. But darkness is afoot and just as Grimhilde gets used to Mageia, she’s forced to leave and become wife to a King she doesn’t wish to marry.

What’s worse, all of Grimhilde’s life, she’s been convinced she’s nothing like her wicked mother. But when presented with the chance to succumb to darkness, will Grimhilde be able to choose good over evil?

*Copy generously provided by the author when you subscribe to her newsletter.*

If this is just a prequel and a short story, I don’t know how epic TK White’s novels would be like.

It’s a re-telling.
Of what?
A mixture of fairy tales I suppose.
Ugh, another retelling.
Oh but the stories are getting mixed up. It’s like Ariel from The Little Mermaid didn’t lose her voice, but instead Cinderella lost her voice and Ariel lost her sea shell. (Lol. That’s a bad mix up.)

I’m a huge fan of re-tellings, and it’s been a while since I read an unpredictable and really loose re-telling. There are these characters whom we know and love and we know the journey each character takes but in this novella they kind of swapped lives.

I was just caught by surprise to how this story turned out. It’s dark, magical, it gives you hope only for it to be crushed. (It plays with your feelings that way.)

There’s a character named Mal, and she has red hair and green eyes but my brain just sees Mal from Disney’s Descendants played by Dove Cameron with purple hair and bangs. I need to force my imagination to see her with long red locks.

One thought on “Book Review: A Darkness Found”