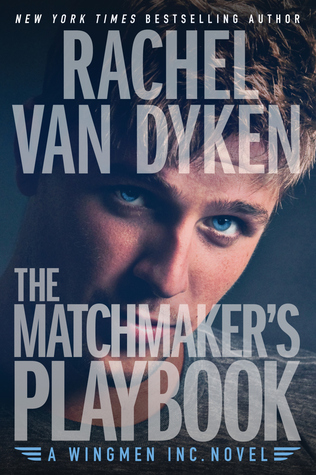 Wingman rule number one: don’t fall for a client.

After a career-ending accident, former NFL recruit Ian Hunter is back on campus—and he’s ready to get his new game on. As one of the masterminds behind Wingmen, Inc., a successful and secretive word-of-mouth dating service, he’s putting his extensive skills with women to work for the lovelorn. But when Blake Olson requests the services of Wingmen, Inc., Ian may have landed his most hopeless client yet.

From her frumpy athletic gear to her unfortunate choice of footwear, Blake is going to need a miracle if she wants to land her crush. At least with a professional matchmaker by her side she has a fighting chance. Ian knows that his advice and a makeover can turn Blake into another successful match. But as Blake begins the transformation from hot mess to smokin’ hot, Ian realizes he’s in danger of breaking his cardinal rule.…

I can’t remember the last time I laughed this hard to a Romantic Comedy novel.

This post will be divided into two, a spoiler free and a spoiler alert review. Since this is not an ARC or a new release and I got lots to say about it so…

Oh why did I take so long to pick up this book! Ian Hunter is a very cocky character and he step out of line a lot of times, people just can’t seem to stay upset with him. Guess they too couldn’t resist this caramel blond and hazel-eyed wonder who’s just oozing sex out of every pore of his body.

This is my first book written by the author and it won’t be the last. I’m picking up The Matchmaker’s Replacement as soon as my schedule clears up. I actually read this book because Passionflix has turned this into a movie starring my ultimate bae. (Will talk about Passionflix in a separate post.) And the movie comes out this March 15, 2018! The main cast is physically perfect, we need to see them in live action first. I’m sure there’ll be chemistry, Passionflix never fails in chemistry.

So IAN HUNTER.
Hot. Caramel blond. Hazel eyes. Has a body of a god. Rock hard abs. Knows men and women so well just by checking the summary of their very specific data and with a quick look at them personally. His name alone melts my insides.

Still not convinced? Here’s a teaser.

But when one can’t play…one teaches.
And I was more than just a football player.
I was the player.
Of sports.
And…of women.
The best of them all.
So who better to teach women how not to get played than an actual player?

P L O T
A very fun and easy read. Fast paced also, so it’s barely redundant. The idea of Wingmen Inc. is so cool, I wonder if there are really guys or girls out there doing this ‘cause that’d be awesome.

For the first time in my life, I wanted a girl that wasn’t mine to have.
And it sucked.

Ian Hunter
Though he kept repeating he doesn’t deserve Blake, thankfully it wasn’t enough to annoy me. I don’t really get into guys minds, I don’t really know how they work, but I find Ian’s thoughts to be real enough making him sound like an actual human being instead of a fictional character. Yeah his ability to read people so easily is out of this world and quite impossible, but other than that, his reaction to hot women, wondering why being with Blake is so different, sounds real to me. Guys get to thinking too.

It wasn’t that it had been too long without a girl.
It was that it’d been a lifetime without the right one.

Blake Olson
I really don’t think she needed the help from Wingmen Inc. I think she just needed a little push. She’s already confident but she just doesn’t know how to properly express that confidence. Ian only had to negotiate to convince her to but new gym wear. Or maybe she just needed Ian all along to open up herself to the world. When they got into that final argument she didn’t give on Ian easily. It shows how determined and strong her character is. My only issue is she said the L word to quickly, but hey, who wouldn’t say that to Ian Hunter?

Lex and Gabi
I love how these two could not stand each other. Lex always teases Gabi to no end and Ian is constantly alert when these two are in the same room together. He’s always worried that the police or the fire department will come knocking at their door soon. However, their deep love for their common best friend Ian knows no bounds. They look out for him all the time and I am just jealous of this gang. Screams #squadgoals all the way. And even though Lex and Gabi can’t stand each other, they always have each others backs when the time comes.

W R I T I N G
Rachel Van Dyken sounds like she’s actually been inside the male brain and that’s why this book is such a breath of fresh air to me. Ian’s character is light and fluffy, unlike my usual reads with male POVs where they’re very dark and always afraid of hurting women. I need more of her writing!

Life is full of choices. Some good, some bad. I wasn’t sure, in that moment, if I was making a bad choice or the first good choice in a really long time.

O V E R A L L
This is an unforgettable read, my experience with this is very different from any other book I’ve read before and it will always hold a special place in my heart. Now I need to prepare for the movie. See official poster below.