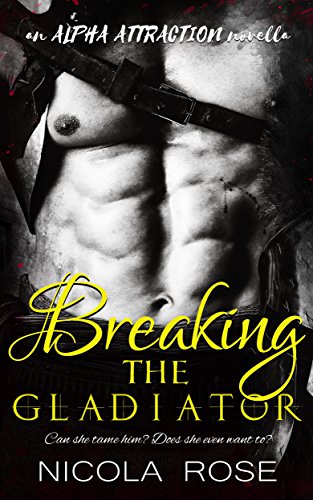 I’m trained to kill… for the amusement of others.

Emotions are a weakness, so I have none; except anger and hate. All the good ones were beaten and starved out of me long ago. I barely even feel pain anymore.

But when she touches me? Feelings thrash to the surface, and in my world those are dangerous. She’s poison, feeding off my rage for her own sick pleasures. I hate her. She keeps finding cracks and opening them up, squeezing herself inside my chest.

She’s going to get me killed.

I’m Domina of the Atticus ludus, where we train gladiators to compete for victory.

It appears I have it all… and I wish I could make myself feel that way. But I’m numb. Too broken to even care. The only time I feel alive is when I’m with my husband’s champion gladiator. My slave. In the arena, and the bedroom.

It’s disgusting for a woman of my rank to sleep with a man like him. He’s a dirty, worthless animal. His touch should feel repulsive. His gaze upon me should make my skin crawl.

But he’s mine. And I want more.

Note to readers: 20k novella. Contains some blood and action, and steamy romance between characters battling with dominance and consent issues. Expect a lot of heat and a little darkness. Because romance isn’t always sweet.

Dark and twisted, fiery hot and bloody, but I couldn’t get enough!

NOW THIS WHAT I CALL A NOVELLA! The best novella I’ve read to far. It has a complete story line and character development. Nicola Rose has created a masterpiece.

I love how the character is in a dilemma of his feelings between hate and love, but never hate and lust. Ever hated someone so much that you later realize you can’t stand to be apart from them? Basically that’s what happened in this story.

Up until later part of the story I was still so unsure of how it will end. Will the gladiator die and the wife live the rest of her life in mourning? Will they both die? Will they both live? The ending was quiet unexpected. You have to read for yourself to find out.

A champion gladiator doesn’t feel love. How could he? His only passion is to win the next fight. Then the one after. And again.

I seriously wouldn’t mind if this would have a sequel. I don’t care if it’ll be a series of novellas, I want more!

One thought on “ARC Review: Breaking the Gladiator”