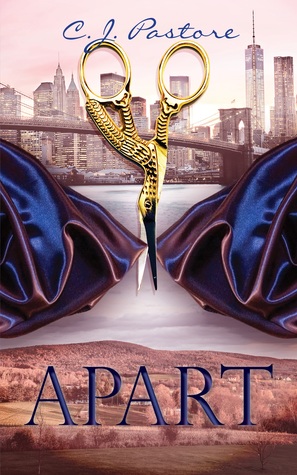 Title: Apart (Captive of a Commoner #2)

Growing up is hard. No one knows that better than Alicia Cesare.

As a child, Alicia struggled to free herself from the cloying shadow of her mother’s depression and the overprotectiveness of a meddlesome family. Now, with a top-selling fashion design and a passion-filled relationship with New York City real estate mogul Chase Reardon, being an adult isn’t so bad … until she’s viciously attacked by a Russian drug lord out for the blood of anyone that matters to Chase.

Under constant surveillance from family and a team of ex-special-ops Marines, Alicia remains determined to maintain her freedom and grow her fashion brand. This does not sit well with Chase, who considers Alicia’s behavior as much of a threat to her safety as the drug lord himself.

Chase thought his service to the United States ended, but when he’s called to duty overseas, he readily responds. What’s meant to be a simple mission unravels into a dangerous separation for the new lovers.

No matter how independent Alicia thinks she is, nothing could have prepared her for this twist of fate.

Trapped in a web of lethal reprisals from Chase’s past, Alicia struggles to protect herself and those she cares about while grappling with loss, need and the transcendent force of unconditional love.

If you like stories about your boyfriend’s past coming to haunt you and everyone you love, mixed with a husband getting deployed, then this book is for you.

I can’t say I am crazy about this sequel. Compared to the first book, Captive of a Commoner is way better. However, considering the theme for this book where they’re fresh relationship is being put to the test by keeping Chase and Alicia apart it really gives off the vibe of sadness, worry, and learning how to stand strong despite all that’s happening around their lives. The first book was all adventure and excitement while this one kept me on edge by worrying when Dmitri will strike again.

I do love books which give me insights of lives of people with challenges beyond every day problems such as where to find a job or whether your significant other is cheating on you or not or other women hitting on your man. I can’t say much since this is a spoiler free review, but to get a feel of the vibe I’m talking about here I’ll just say this. Alicia and Chase are in a blooming relationship, a lot has happened since the end of book 1 and now Chase is being deployed and the length of is absence cannot be determined.

There’s all this worry, and stress, Alicia is trying to stay afloat by creating new designs and each design marks something in her life. Still written in the single point of view of Alicia, her world being put on a roller coaster ride since being reunited with Chase Reardon.

I can’t say I love this book, there’s just too much of Alicia’s thoughts and flashbacks of her sad past but I can’t say I hate it too. Stuck in the middle I give it a 3 out of 5 stars.

I know now that time is real and not because it can be measured in hours or days or even decades. Time breathes because of change. Change signals the passing of stretches of periods.