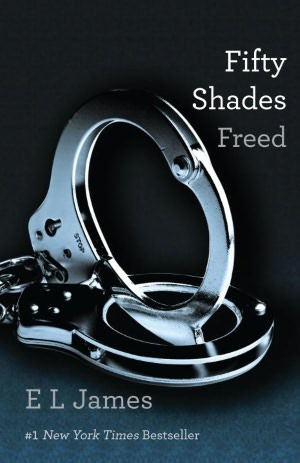 Now, Ana and Christian have it all—love, passion, intimacy, wealth, and a world of possibilities for their future. But Ana knows that loving her Fifty Shades will not be easy, and that being together will pose challenges that neither of them would anticipate. Ana must somehow learn to share Christian’s opulent lifestyle without sacrificing her own identity. And Christian must overcome his compulsion to control as he wrestles with the demons of a tormented past.

Just when it seems that their strength together will eclipse any obstacle, misfortune, malice, and fate conspire to make Ana’s deepest fears turn to reality.

This book is intended for mature audiences.

I don’t think the Fifty Shades franchise need any introduction.

I know I’m waaaaay behind with the excitement of this series but when the books first came out I was still in high school and I live in a conservative country, plus I think I just recently discovered Goodreads at the time. Fifty Shades of Grey is actually my first romance book (I think, if not Nalini Singh’s Guild Hunter Series) but I started reading the book a couple months before the first movie came out. I can still remember the commotion in our city, and I guess in our country ‘cause I think it was the first time an R-rated movie was shown in our local cinema. They did block the naked scenes and cut some steamy scenes out to keep it PG but people got angry thinking they were robbed of their money. Anywaaay, the next movie came with no edits and it was played the way it was with no covers and deleted scenes.

It took me a while to recall the characters and played who’s who because it’s been over a year since I last read the second book. I didn’t even watch the trailer, just some facts on the official IG Story of the franchise, I even try to scroll away when the trailer hits my feed because I don’t want any spoilers! So here are my thoughts to the final book.

P L O T
I always thought the Fifty Shades Trilogy was too mainstream and over-hyped but now that I’ve finished the book, I can’t say I agree entirely. I’m not here for the kinky-fvckery, I’m really here for their complicated life! Jeez! Fifty Shades Freed has enemies who’ve been out to get them since childhood, car chases, kidnapping, a father in an accident, pregnancy, and of course a newly married couple.

Christian and Ana (still distracts me that we have the same name but I imagine Dakota’s face instead) have been living together for months, they married in haste, and you think nothing would change. Hell, everything changes when you’re married. Things get more into focus and greater challenges arise. (I wouldn’t know much since I’m still waaaay far from getting married but I tried to put myself in Ana’s shoes.) I love how natural (though nothing in life with Christian Grey is natural) their arguments could come. Christian getting worked up over Ana not changing her last name, though she has her understandable reasons but knowing Christian, he always gets his way. Even though she’s his wife already the jealousy still comes when Ana found out Christian went to his ex fu** buddy when he found out Ana was pregnant. Though I think he overreacted with that one, but Anastasia lets me understand why he was extremely angry (Because this was out of his control and what not.)

I love how the wedding ceremony was skipped, great decision. (Though the movie is promoting so much about the wedding that was barely given any attention on the book.) Oh and the mention of the prenuptial agreement that Carrick made Ana sign.

Anastasia Steele Grey
Still so crazy, stupid, and reckless. Never listens to Christian’s orders, gets herself into tight situations, and always trying to be a hero. (Sounds like I hate her, but I don’t.) She’s really strong, and brave, and in the wake of Christian’s terrifying anger that even his security team blanches out when steam exits his ears, Ana still stand firm. She has become much more stronger in this book and has learned to face Christian’s anguish. I praise her for keeping calm when he’s so angry about little things.

Christian Grey
I was bothered by his sudden shift in personality. He listens to Ana more and would sometimes do what she asks. Sometimes he’s even the submissive and Ana is the dominant. He’s beginning to turn really soft and sweet. I never thought the day would come where I’d get the feels from Christian Grey. He made me giddy just as he makes Ana (the character) giddy. Though mostly he’s still the same, who seems like a bipolar for changing moods so quickly. I’m so glad he finally accepted the fact that Ana is never going to leave him. Also, he’s finally accepted that he is a good person, and he cares for other people. In the end he still has some monsters on his shoulder regarding his birth mother by not letting their daughter have her name but at least he’s over his fear of becoming a father like his own birth father.

“Do you think I would let you be a bad father?”

Anastasia knows the right words to console him and this line struck me hard.

E.L. James is a wonder. She has made a masterpiece in the world on Christian and Anastasia. The adventures, the hardships, the challenges in their separate lives and their life together. Monsters from their past that they try to keep in the dark, but we know nothing stays hidden forever. I believe this trilogy would make its mark in history.

O V E R A L L
This is probably my favorite book in the series. I don’t think I’m ready for marriage after reading this book but it has taught me a lot in handling my relationship with my current boyfriend. What would Anastasia Steele Grey do?

I’m still going to read Grey and Darker as soon as my schedule gets an opening. I’m super excited to be in Christian’s mind.

He makes me feel loved, because in spite of his fifty shades, he has a wealth of love to give.