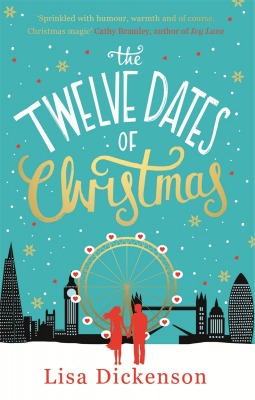 Title: The Twelve Dates of Christmas – The Complete Novel

At thirty, Claudia’s life is stale and the romance with long-term boyfriend, Seth, has disappeared. Determined to inject some festive spark back into their love life, Claudia and Seth go on their first date in a very long time. But when the night ends in disaster, Claudia suddenly finds herself facing life – and Christmas – alone.

Life alone is exciting, scary and full of soon-forgotten exercise regimes and ill-advised attempts at crafting sexy underwear. It’s also filling up with dates, surprisingly. With best friends Penny and Nick at her side, a surplus of festive markets, mulled wine and Christmas tunes, Claudia attempts to face all this change with gusto. One thing’s for certain: this year, Christmas is going to be very different . . .

This is the story of Claudia and her twelve dates of Christmas. Hilarious, uplifting and romantic, it’s a story about losing love, finding love, and discovering what’s been there all along. Expect Christmas sparkle, butterflies-in-your-stomach romance and a lot of very funny moments in The Twelve Dates of Christmas.

*SPOILER ALERT!*
This is my Christmas read! It’s my second holiday book. I only read a holiday book during Christmas and for the last couple of years I’ve been reading Let it Snow by John Green and two other authors.

This was a really fun and festive read for the season. This will be a unique style of review. Since the title is obviously from the classic song, I’ll be listing down Claudia’s dates! But they can’t be sung in tune — I tried.

On the first date of Christmas my boyfriend gave to me, a broken heart and humiliation.

The bonus lists were wonderful too! Namely, ‘Twelve Tips to Dating in London‘ and ‘Twelve Mini Breaks of Christmas‘.