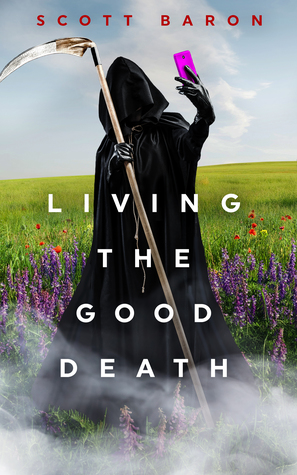 Have you ever had one of those days? You know, the kind of day when things just don’t go your way. Like when your botched suicide attempt and claims of supernatural powers get you hauled to the emergency room, placed under observation, then transferred to a locked-down psych facility.

The girl who thought she was Death had failed miserably in her efforts to shed the troublesome human body in which she was trapped. The result? Finding herself surrounded by nutjobs, locked in a mental ward ruled by a humorless doctor with a Napoleon complex and a penchant for sleight of hand. Sure, she did technically bring it on herself, but how was she to know that trying to off herself in public and using her outside voice to proclaim she was Death incarnate would result in a psych ward lockdown?

With that problematic little blunder behind her, the concerns now vexing her were pressing. Escape, both from the mental hospital, as well as from this plane of existence, was vital, but equally so was addressing the other issue haunting her. The big one. The one that could end the world. The issue that with Death missing, people would rather inconveniently no longer die like they were supposed to. Eventually, things would hit critical mass. She just didn’t know when.

The situation was, well, grim, to say the very least. An irony not lost on the girl claiming to be the Death.

*ARC was given by the author in exchange for an honest review.*

Forever is today, but forever.

I had high hopes and a different expectation for this book. I got disappointed because it wasn’t what I expected, and other factors too.

What I expected:
1. It would be humorous and colorful
2. The setting will be in different locations

What actually happened:
1. It was quite dark
2. Yeah the story took her to different locations but it’s mostly based in the Psych Ward and I don’t know why but those places give me the creeps.
3. The story was too long. It took me a while to finish this book because there are just so many events happening. I understand it’s part of her adventure but the story could have worked without the unnecessary scenes.
4. The book ended without properly explaining what lesson the main character had to learn.

It’s not the worst read in my 2017 reading list but it could come in second.