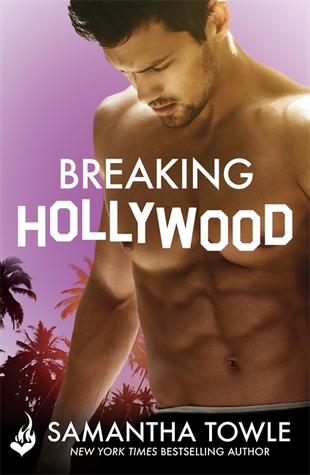 Now, my guilt and homelessness have me living in his apartment, taking care of him, while he’s incapacitated.

Living with the hottest guy in Hollywood, who I’ve had a crush on forever, doesn’t sound like a chore, right?

Gabriel Evans is a crude, rude asshole who drinks way too much and smokes like a chimney.

The sooner I get a new place to live and when Gabriel’s foot is healed, I’m out of here.

Breaking Hollywood wasn’t part of the plan. But neither is falling in love with him.

Ava and Gabe just cracks me up. Samantha Towle knows what she’s doing.

P L O T
Fast paced and straight to the point. None of those background stories, setting preparations, we immediately met Ava who accidentally ran over Gabe with her car. From then on everything was flying. Nothing was dragging, nothing was too slow. I didn’t want to take reading breaks but considering my body condition, I need to rest but I had to choose a good place to stop in the story before I did.

C H A R A C T E R S
I can’t say they’re three dimensional characters because I feel like there’s truly more to them if treated as human beings, but maybe it’s just my lack of observation because I was completely peaking over their shoulders from start to end. I was all about “what are they doing?” and “what’s going to happen next?”. They are quite predictable though, but people in real life can also be predictable especially in certain situations where there would only be two reactions they could give. However, I can honestly say that Ava and Gabe are meant for each other from the very beginning. They are each other’s match especially in their arguments.

W R I T I N G
My only concern was whenever Gabe and Ava left the apartment building, they were never met with paps. I’m not very familiar with the celebrity world, but I was thinking that maybe a pap or two would be setting up a few blocks away from the garage exit of the building. Well maybe that was part of the security they offered, I don’t know. I guess what I’m trying to say is I wanted to see pap action, like they’d get disturbed by paparazzi. I like how the story was told in both of Ava and Gabe’s POV and how it wasn’t redundant. Like a single scene is told by one person only and it wouldn’t be repeated in the other’s POV. The story kept progressing with each shift of POV.

O V E R A L L
This is my first Samantha Towle book, it certainly wouldn’t be the last. I am jealous of Ava and Gabe’s relationship and their nonstop bickering which both know is only meant halfheartedly, though sometimes it hits a nerve but they’re very forgiving of each other. I also loved how this book ended. It just might be the best stand alone end I’ve read so far in my entire life. The conclusion was beyond satisfying, I wanted that one to happen, and that other one too, and I’m so glad I got them both!