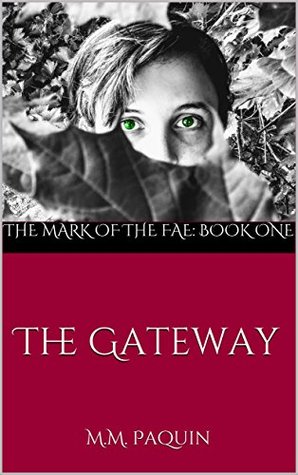 For some people, the draw to be surrounded by nature is strong. For Shaylah Derry, that’s exactly how it is. The draw to the forest behind her house is all-consuming until one night it gets to be too much, and she finds herself at the window, staring out into the trees. The last thing she expected to see, however, is a set of eyes staring back at her.
As Shaylah’s impulse grows, so do her suspicions, until her small Oregon town becomes a town tied by secrets and fairytales…literally. With the help of her best friend and the new boys in town, Shaylah begins to unravel the secrets that have encased her family for years. And as soon as she seems to have figured it out, things get much more complicated.

**WARNING book contains some language. May not be appropriate for younger readers**

*I received a copy from the author via email in exchange for an honest review.*

I liked it more than I hated it.

P L O T
The plot is really slow. It takes so long to progress which is why this book is quite long. Events of days keep repeating over and over again and it starts to get annoying. But I do understand that it is a key plot to the entire story. Most of the time the characters go to a certain place and think to themselves that something bad might happen and nothing ever does. It seems that luck is always at their side and barely any harm comes to them which makes the story rather boring. I’m used to reading books where almost nothing goes as planned and the characters need to take a detour.

The setting of the story is mostly in the ‘forbidden forest’. That’s because the title is ‘The Gateway’ and the forest is this huge gateway to ensure that the Faes who reach the borders of the ‘Fae city’ are worthy to enter and it is also for the protection of the residents within the city. However, with just enough patience, I carried on and filled my curiosity to learn what the author is trying to tell me.

C H A R A C T E R S
I know how hard it is to create different characters and to ensure they still maintain a realistic personality. So far the characters in this book are one sided but not much has happened for them to reveal more sides of themselves. Sometimes I think the main character is just too dumb or stupid. When told about centaurs and satyrs, she had no idea what they are. Though some of her side comments to herself are hilarious, most of the time her thoughts are just wasting paper. It annoys me most of the time too which is why I tend to skim over those and get to the conversations. Most of the characters are also new to the eyes of the main character, and we know how new people act. I am looking forward to seeing more sides of these characters in the next book.

W R I T I N G S T Y L E
This is the other reason why I don’t love this book. I have no problem with it being told by the POV of the main character, but I do have a problem with the need to repeat her thoughts in text. This is something my creative writing teacher told us when we first submitted a short story to her. A line is said by a character, it’s clear and understandable by the reader therefore there is no need to repeat it in the form of thoughts by another person’s POV and that is exactly what’s happening in this book. I’m sorry for sounding mean but I’m just laying out the lesson I learned from my teacher and it has stuck with me ever since.

O V E R A L L
In the end I’m all about the story and barely about how it is told. I understand we all have a story to tell and others are just better at telling them rather than some but each of our story no matter how unlikely they are told they are filled with magic and light.

This may be far from my best read of the year but it is also not at the bottom of my list of favorites. I still do look forward to reading the second installment of this series.