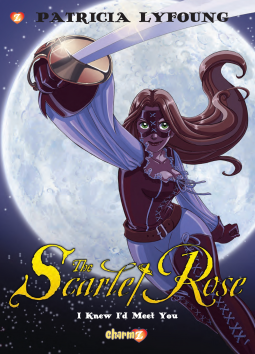 Maud, a dreamy young woman, who loves justice, lives in France in the 18th century. The incomprehensible murder of his father forced him to rejoin Paris where his grandfather, a noble whose existence she was unaware, saw. It crosses the road of the Fox, a brigand of the highways that she admires. But she still does not know anything about the secret that her father bequeathed to her and that a mysterious individual covets.

Thank you Papercutz for the copy via NetGalley.

This Graphic Novel is fun, easy to read, and has a good sense of humor.

It starts with the murder of Maud’s father, a past revealed to her and thus she travels to live in Paris. Her huge crush on a bandit calling himself “The Fox” has lead her to a conclusion of becoming a bandit herself – Scarlet Rose.

Guilhem is quite cute but I can’t really tell of his age based on the drawings. Their facial expressions are right and I love how they change to impossible human faces to exaggerate an emotion.

I believe the english translations have just begun and I can’t wait to read the next installment. This is my first Graphic Novel series so I’m not very familiar with the slang. Is it called an ‘installment’, an ‘issue’?