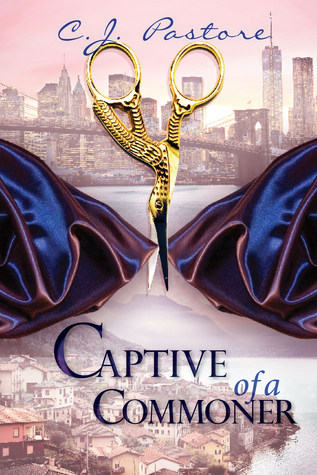 Title: Captive of a Commoner (Book 1)

Can love penetrate an abusive past and defeat unwarranted guilt?
Alicia Cesare has a lot to celebrate. A recent Parsons School of Design graduate and recipient of a fashion design award, she embarks to Europe on a quest for independence and recognition. Instead, she finds trouble and mayhem and must accept the help of ex Marine and real estate magnate, Chase Reardon, the only man she’s ever desired. Problem is he barely knew she existed. That is about to change.
Like a lit match to a firework, rash innocence ignites fierce over protectiveness and a sizzling romance develops, but Chase is a haunted man. Scarred by an abusive past and stalked by the vengeful head of the Russian drug cartel, he struggles to follow his heart while safeguarding those he loves. When Alicia is unwittingly thrust into his web of relentless violence, Chase is determined—at any cost—to protect her from his past.
As each new sexual awakening binds her closer to him, Alicia is convinced she must help the love of her life defeat the ghosts of his past. It will prove to be an unyielding test of courage and stamina.
*Copy was received from NetGalley in exchange for an honest review.*

“Green sparks confronting blue stormy seas. Fire and water. Opposites in so many ways but the same where it really counts. Love. Empathy. Concern. And knowing that we’re home in each other’s arms. I feel it. He feels it.”

A girl with a huge and long term crush on her brothers’ friend. A guy who has a dark past that haunts him to his future. Luxury, money is not a problem. A friendship bond made by blood. Sex in places you never thought possible. If these things don’t get your attention then I don’t know what will. It’s like 50 Shades of Grey but only better, much, much better.

I love this book and since this is the first installment to a trilogy I can honestly say that I will be looking forward to reading the rest of the series. This book has its ups and downs but I really enjoy most of its attributes and especially the story.

“You and I may have grown up in the same town, but we came from different worlds.”

Alicia has accepted Chase’s past but it seems like Chase doesn’t believe that she’ll be able to understand and cope with his problems. To save a dear friend Chase had put someone in jail and when that person got out he was seeking for revenge. And what better way to have revenge than hurting the people he cares the most. Family, friends, girlfriend, spare no one just to get back at Chase Reardon.

“Problem is, even in fairytales there’s evil.”

Part of knowing someone is after her boyfriend, Alicia thought she would never have an easy life with him. But no fairytale is complete without the villain right?

I’ve been on the edge of my seat while I was reading this book because I always get worried and wonder whether there’s going to be a trap or something bad might happen. The story isn’t predictable for me I have been surprised countless of times. I think this book felt very long but it wasn’t bad at all. I can’t wait to read the second book.

I highly recommend this book to my friends. I’ve even started telling them about my feels and excitement for this book. It’s gut wrenching, exciting, painful and humorous.

Now I’ll break down the story so I can say the things I didn’t love about the book. It would spoil others of the story so I placed it all in the Spoiler Section (but not all below here are bad comments).

1. They had sex once and the next day Chase was all like, ‘I’m in love! We will be together forever.’ There was no build in their relationship, unless a plot twist happens where Chase has been crushing on Alicia for so long too. I would have loved to see that build but I understand that it would take too long and just drag the story.

2. “I like being able to pay. For too long that wasn’t the case.” This line helped me understand why Chase is the way he is and it may seem like he’s throwing away money of Alicia but he’s only doing what he couldn’t afford to do while growing up.

3. The surprise before Alicia’s award night killed me to the bone. I wasn’t expecting him to be in her room waiting for him and with a complete outfit!

4. Alicia is always jumping to conclusion that they’ll break up every time they fight. She sounds very childish every time it crosses her mind. It’s just a fight and things will work out eventually. She knows Chase loves her yet she still has doubts on their relationship.

5. I always worry when Alicia is alone because I think that something bad might happen to her and Chase would lose his shit.

6. Shoutout to Herman for being part Filipino!

“Everything about you is beautiful. I missed you so much it hurt to breathe.” Young relationship problems.

The cliffhanger was the worst. It may not seem like a cliffhanger to you but I badly need to know what happened to Dimitri and Fiona.